This is one of our favourites…there are so many iconic cars in movies and TV shows but we’ve dug out a few of the less conventional yet still awesome cars featured on the silver screen from across the decades.  You won’t find Bond cars, Herbie or Minis in this but you might just find a few little gems you didn’t know about.

🚗 Ferris Bueller’s 1961 Ferrari 250 GT California
Not only is Ferris Bueller’s Day Off an iconic movie, the awesome Ferrari GT California is a beauty of a car.  Only around 50 were made and if you’ve got one hiding in your garage get it to auction – you’ll get around $10.5 million for it.  If you’ve got it’s slightly sexier twin – the SWB – you’ll get around $5 million more.

You can learn more about the car in the movie (that was nearly a Mercedes…can’t picture that!)…

🚗 Maxwell Smart’s Sunbeam Tiger, Opel GT, and VW Karmann Ghia.
In the opening credits to the original TV series Smart drives each of these cars. In the 2008 movie remake, where Steve Carell stars as the novice agent seemingly out of his depth but always coming up trumps, all three of these old beauties make an appearance at one point or another.

Image: I Love Get Smart

🚗 Thelma and Louise’s 1966 Ford Thunderbird
So sad that this little beauty had such an unhappy ending (spoiler alert … it goes off a cliff at the end!) but during the movie it played an integral part in getting Thelma and Louise away from their dreary lives and, later, from the scene of a crime.  The movie car is a convertible but the T-bird also come in a hardtop coupe.  Heavy and comfortable, the 300bhp V8 engine took almost 11 seconds to get to 60mph!

🚗 Chitty Chitty Bang Bang
How can we not include the 1910 European Gran Prix racer that is the namesake of this 1968 family fun musical (with songs that get Truly stuck in your head!).  At the beginning of the movie we see Chitty winning every race she runs until ending in a smash of flames and she’s not seen again until Dick Van Dyke finds it and brings it back to life.  Chitty’s number plate, Gen 11, was given to her by writer Ian Fleming (also of Bond fame) and spells out the Latin word Genii – meaning magical person or being.  She certainly was that!

🚗 Austin Powers’s ‘Shaguar’
The International Man of Mystery drove two ‘Shaguars’ – a 1961 Jaguar E-type Roadster, a car once called ‘the most beautiful car ever made’ by Enzo Ferrari, and an XK8 convertible emblazoned with the Union Flag with a red, white and blue interior.  The number plates SWINGER and GR8SHAG featured are somewhat illegally methinks!  The movies are a smorgasbord of classic vehicles, if you have time to sit and find them all! If not Best Movie Cars has already done it for you! 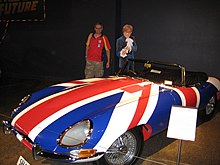 🚗 The Swordfish TVR Tuscan
A sports car brand that started life being made by a dude called Trevor in Blackpool ends up in a John Travolta movie…how does that happen!  TVR has a troubled history. It’s most successful era was undoubtedly under the hand of Peter Wheeler who was at the helm at the time of Swordfish and was instrumental in many of the new launches throughout his 22 years.  Nowadays a consortium of TVR lovers are in control, bringing the beloved British brand back to life. Find out more.

Some beauties in there, huh!  Which is your favourite movie car – and do you own a classic movie car?

Whatever your automotive needs are, we’ve got you covered. We love all cars – classic or everyday, Mini or Ferrari, van or convertible – come and see us. Especially if you want some pink fluffy dice to show off your little beauty 🚗